Some Notes About Notation… 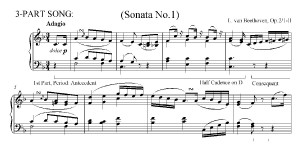 You’ve seen that stuff with the funny lines and symbols? That’s called “Standard Notation,” and it’s been around in roughly its present form for about 500 years. Notation is an excellent and precise way to convey virtually any music known to humanity.

Guitarists in the realms of Classical and Jazz have had only notation to read and play from. It’s still the preferred form for these highly skilled and virtuous forms of music.

However, the guitar is very different from most any instrument encountered in an orchestra or band.

Why? Because on horns, woodwinds, even pianos, any given note occurs in only ONE – and I do mean 1 – place on that instrument. Even the piano, with 88 keys spanning over seven octaves has Middle C, for instance, on only one key. And horns can’t play chords. 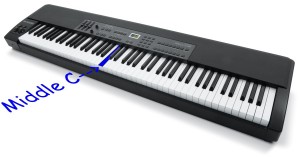 On the other hand, Middle C can be found on a Standard-Tuned GUITAR in 5 places. Here’s the proof:

Folk musicians and those blues cats back in the 1900’s recognized this fact, and said “the heck with these notation charts” (or whatever equivalent words blues cats used back then) and started focusing more on the FORMS that they found sitting all over the guitar. Many of them played strictly by ear, and quite a few didn’t even name notes.

They made stuff up as they went along. They forged the rebar and laid the foundations of practically all popular modern guitar music… ain’t that amazin’? Truly we stand on the shoulders of giants.